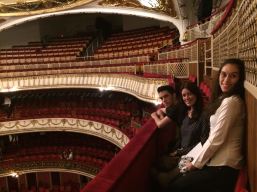 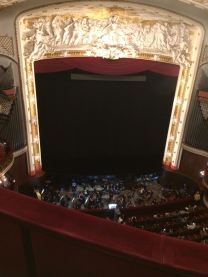 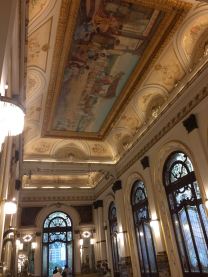 I’ll start by yesterday. My whole family went to the Municipal Theatre (I don’t really believe in Heaven, but I’m pretty sure if it exists, mine will be a theatre. So. Beautiful.) to watch the Opera Fosca. My dad wanted to see an Opera and this one was on display, so…

I went with my mom to there and my dad and brother were going to arrive later, since they were in another part of the city, Gabriel was doing a college entrance exam. My mom was delighted by the beauty of the Theatre, I was too, it’s way to beautiful to not be enchanted, no matter how many times you go there (I can almost look like an expert, don’t you think? C’mon, I’ve been there, like, two times already haha). It was raining lihtly, but we could see the balcony, the cafe and to look more deeply to the walls of the Noble Room) I haven’t been there the other time.

The Opera was wonderful, stupendous, wondrous! I absolutely love it!

Although my mom and dad took some good naps while there and they all complained about the performance of the ballet (YES. It was an Opera, Ballet and Orchestra combo. How awesome?), they really enjoyed. Not my brother though, he just liked a bit the singing and all, but he’s really not a great fan of these arts.

The story was about Fosca, the sister of the corsaire’s lider, Gajolo (it is read “Gaiolo”)who fell in love with Paolo, a rich venezian guy who was kidnapped by these pirates, but Paolo don’t want to marry Fosca because he already has a bride, Delia, and he’s in love with her. Plus, his dad paied the pirates 100 gold coins, and they were going to return him home. “Seizing the opportunity” of being in Venice, the pirates found out there’s going to have a huge collective marriage, so they all decide to kidnap all the brides there and become rich with all the gold their families are going to pay in order to rescue them.

Fosca gets pretty mad her brother hasn’t done what she wanted to (aka keep Paolo there for her to marry him). There’s also this guy, Cambro, who loves power, so he proposes Fosca to marry him and make him the lider of the pirates, in exchange, he would kidnap Delia, Paolo’s bride, so Fosca can take revenge. Watching all the five acts, I just came to the conclusion that Fosca is a pretty lonely crazy lady, so she accept his offer (seriously, in our days, I would completely recommend her a therapist, now, back to reality).

To resume, Delia and Paolo are finally reunited, Fosca drinks a poison drink and die, Gajolo (her brother) kills Cambro and decides to revenge his sister’s death. Five acts, approximately three hours in total, I totally recommend that, seriously, I loved it!

Today’s morning I woke up by 7:30, had breakfast, trained a bit of pirouettes, made my bun and tried to calm my nerves by listening to Rossini Cards solo or Chopin music’s. Today was the day that the RAD teacher was going to our school to watch our class.

I usually don’t get that nervous, but everything went good, the lady was kind and lovely. I messed up some center combinations when it came to do to the left, and some barre exercises. My number was 1, so I had to be in the front in everything, every time. I got calmer when the class started. The exercises were all like what we usually do in our classes, but I was sweating so much! I guess because of the “pressure”, me being nervous,  I didn’t need to. It was just a class after all.

But, great news! Our school was accepted and my teachers are going to introduce to method Royal Academy of Dance next year – which I’ll probaly not enjoy, sadly, the great point is that I’ll be living different experiences abroad, and the school that I’ve been following is also a RAD certificated, so no worries! I’m really proud of my teachers and all my friends because of this one more achievement.

It was raining really much when we finished, so I spent some time just talking with my friends about our dance experiences. My friend kindly offered me ride, and I could enjoy not walk down those five blocks in heavy rain. I said goodbye and went to the candy store to buy the chocolates to our Secret Santa (Kriss Kringle) in ballet wednesday. I walked until home singing I Sing in The Rain in my head and had to do some grand jetés to not step on those enormous water puddles in my street.

It’s been some hours since I’m back from an extra driving class, since my exam is already this wednesday morning. I didn’t want to do it, but my parents insisted and they booked me a class. It was good though, I could remember some things I had already forgotten.

I’ll now have my afternoon tea and cake before we all go to the gym.

Hope you have a lovely week,